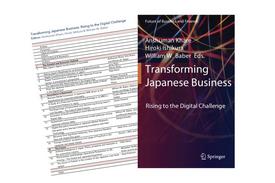 ​​The Japanese B2C Retail Industry in the Digital Age

This book explores how the business transformation taking place in Japan is influenced by the digital revolution. Its chapters present approaches and examples from sectors commonly understood to be visible arenas of digital transformation—3D printing and mobility, for instance—as well as some from not-so-obvious sectors, such as retail, services, and fintech.

Business today is facing unprecedented change especially due to the adoption of new, digital technologies, with a noticeable transformation of manufacturing and services. The changes have been brought by advanced robotics, the emergence of artificial intelligence, and digital networks that are growing in size and capability as the number of connected devices explodes. In addition, there are advanced manufacturing and collaborative connected platforms, including machine-to-machine communications. Adoption of digital technology has caused process disruptions in both the manufacturing and services sectors and led to new business models and new products.

While examining the preparedness of the Japanese economy to embrace these changes, the book explores the impact of digitally influenced changes on some selected sectors from a Japanese perspective. It paints a big picture in explaining how a previously manufacturing-centric, successful economy adopts change to retain and rebuild success in the global environment. Japan as a whole is embracing, yet also avoiding—innovating but also restricting—various forms of digitalization of life and work. The book, with its 17 chapters, is a collaborative effort of individuals contributing diverse points of view as technologists, academics, and managers.

In short, the book:

- Discusses how Japanese business landscape is changing with the emergence of digital technology and what practices are succeeding
- Informs how Japanese industry is adapting, or not, to changes in digital technology. Exposes gaps and strengths in digitalization in Japan
- Presents theoretical and practical cases from Japan that will inform business and academic readers

This chapter shows (a) how digitalisation has impacted the way Japanese consumers behave in the B2C Retail Industry, and (b) how successful players adapted to the new purchasing habits, technology improvements and service challenges. It will be of interest to business practitioners and academics as well in Japan as overseas.

The development of E-Commerce and M-Commerce in the world’s second-largest retail market has been a challenge for traditional businesses and a game changing factor. Nowadays, Japan has shrugged off its initial reluctance. Business conditions have diversified; traditional retailers have transformed. Non-store retailers have flourished together with the spread of the Internet and Mobile Phones, as shown by market data. Several payment options have also become available. Online shopping has been central to both the economising and the nesting trends. In short, the traditional “Japanese Consumer Mindset” has been impacted.

This chapter discusses the impact of Digitalisation on Japanese Consumer Behaviours. The shift in attitudes of consumers stems from structural factors such as the digital revolution, the emergence of a less materialistic younger generation, the economic downturn and the “post March 11 consumer” effect. Among the consumer changes, let us highlight: (i) spending more time surfing the Internet; (ii) buying differently, comparing prices anonymously; (iii) another perception of ownership.

The chapter also identifies how retailers adapted. At the beginning, key players have been reluctant to invest online and to reinvent themselves (limited use of up-to-date technology), as online stores and physical stores are run differently. Illustrating with concrete examples, a focus will be done on online Food, Apparel and Second-hand Retail as well as Luxury goods.

More information is available from:

"The Japanese B2C Retail Industry in the Digital Age"

​What people say about us:

​​“I met Philippe Huysveld as President of the French subsidiary of the Japanese group Yokowo, whose headquarters were located in the Val-d'Oise. I could appreciate the thorough knowledge, by Philippe Huysveld, of the industrial area, but also its expertise on management of a Japanese company. Mr. Philippe Huysveld has also conducted several studies and reference documents related to the economic and industrial relations between Europe and Japan, and has been also an associated Professor of the Cergy-Pontoise University (Paris Area) in the field of Japanese economy, that he masters perfectly.” The Japanese B2C Retail Industry in the Digital Age A Book Chapter by Philippe Huysveld (GBMC)