What people say about the Book:​

5*: "A Panoramic View of the Japanese Economic History"

"From the opening up of Japan to the West in 1867 to the contemporary construction of `smart communities' in Tohoku, Philippe Huysveld offers a panoramic view of Japanese economic history that is beautifully researched and shot through with his personal understanding of the way Japanese business and society works.

This is a must-read for anyone wanting to grasp the essentials of Japanese economic life and the dynamics of rapid growth and social progress - not only of Japan but also of the Asian economies that have followed in its wake. Students of Japanese culture and history will also find much to reflect on in Philippe Huysveld's detailed analysis of the `chapters' of Japan's modern history from the Meiji to the Heisei period. Highly recommended."

"A good and concise summary of Japan's economic history, shedding a light on events since the Meiji period. Good reading."
"

This (e)Book, by Philippe Huysveld of GBMC, is intended for students studying Japanese language or commerce , as well as for the motivated reader interested in the History and the Economy of Japan.

In 2014, Japan is at the crossroads of many challenges, which are discussed briefly at the end of the book. Three years after the deadly "Tsunami" in the " Tohoku " area, what is the status of the Reconstruction Process ? Following the Fukushima accident , will Nuclear Power be replaced by Renewable Energies ? The Japanese population is aging terribly and the birth rate is very low, so, how will the country solve this? By re-thinking the lifetime employment system and promoting labour of women, youth and seniors ? Is Japan still an Innovative country? What is the country doing to protect the Environment ? What is Japan's interest in participating in the creation of Trade Mega- Blocks such as TPP and others? All these topics are hot, Economic History being written nowadays.

Preparing a course on the History of the Japanese Economy, the author realized that there were plenty of books on the History of Japan in general as well as on the country's Economy , especially after 1945, but very few recent books focusing on the purely Economic approach of the whole History of Japan. No doubts about, the relevance of this book!

The  137 pages eBook  (in French) is available for sale right now from the following e-commerce platforms:

The 74 pages (A4 format) Paperback version (in French) is available for sale right now from the following e-commerce platforms: 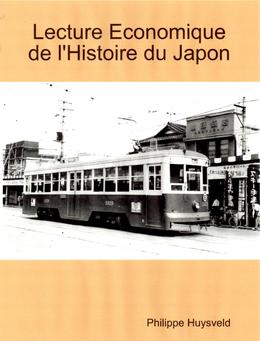